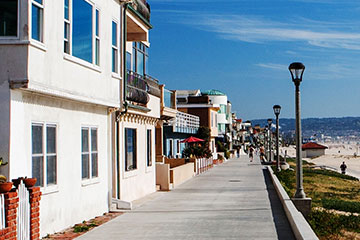 WOW!~ Welcome to this highly desirable home in the heart of Hermosa Hill section. Enjoy the terrific ocean breezes when you walk into this lovely home where there’s th...

This light-filled 2,075 SF Hermosa home that’s walking distance to the beach and Pier Avenue is full of surprises, including a 2-car garage with bonus carport and a top-l...

This architectural gem is waiting for you. Live the beach life with this great location. An entrance on the street level leads you into a family room with its large, coo...

This charming, updated single-family home in Hermosa Beach has so much to offer. Located on Hollowell street with the basketball courts & dog park just steps away, Fort ...

Perfect way to get own in Hermosa at an affordable price! It features 3 bedrooms and 1 1/2 baths, open living/dining and kitchen, lovely wood laminate floors, high beame...

Centrally-located in Hermosa Beach’s Appletree Condo Community, steps from the Greenbelt and less than one mile from the ocean, lies this 1 bed/1 bath condo offering a vi...