You are here: Home / San Pedro 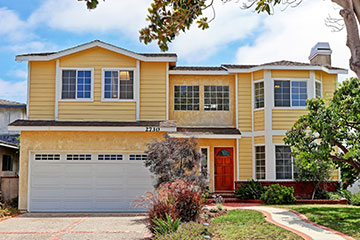 If you're on a budget but want to live in a beach town within site of the ocean, San Pedro is for you. Nestled at the eastern foot of the Palos Verdes Peninsula, San Pedro adjoins The Los Angeles/Long Beach Harbor complex which currently handles more cargo than any port in the United States.

San Pedro began its existence at the turn of the 20th century. The establishment of a deep water port at that time provided employment for railroad men, fishermen and dock workers. Much of San Pedro was built to house these workers. The town features an interesting mix of craftsman bungalows, Spanish cottages and many other homes. The city is bisected by Gaffey Street which acts as the main commercial street offering a mix of national franchises and more unique mom and pop restaurants. Gaffey also provides access to the 110 freeway which terminates at the Northern end of the city making commuting to downtown L.A., Long Beach and employment near L.A. airport easy.

San Pedro is currently having a bit of a renaissance. The neighborhood's waterfront is set to undergo a massive transformation, including a $100 million-plus renovation of Ports O' Call Village which will include upscale restaurants, shopping and markets. Also underway is the creation of AltaSea, a 35-acre campus focused on marine science. Crafted, a handmade artisan marketplace, opened in a warehouse in the Port of Los Angeles in 2012. Four years later, Brouwerij West opened nearby, creating a must-visit weekend destination that includes shopping for unique items, fine dining and live entertainment.

Other San Pedro gems include the Korean Bell of Friendship, a gift to the city from South Korea in 1976. Perched over the Pacific in one of the most idyllic spots in all of Los Angeles, the mighty metallic bell's verdigris finish complements the brightly painted temple that houses it. The exposed, grassy bluff surrounding the temple is an ideal spot to fly a kite or just lounge in the grass of Angel's Gate Park.

The USS Iowa is a relatively new addition to the waterfront. She carried FDR across the Atlantic Ocean during WWll. These days she functions as a museum where history buffs can embark on a self-guided tour of the battleship. The Cabrillo Marine Aquarium is a quaint, low-key place that is home to a jellyfish farm, a hands-on tidal pool exhibit and 30 ocean-life viewing tanks. Special seasonal events include two-hour whale-watching trips and occasional guided walks to the tidal pools at Point Fermin Marine Life Refuge. This aquarium is perfect size for the little ones to spend an hour or two learning about local sea life.

San Pedro is a quiet, slightly removed city that offers so much and yet is still well located for those commuting to work. Affordable single family homes on quaint streets, vintage homes ready for rehabbing or ocean front mansions with panoramic views can be had here.

Welcome to your next Investment Opportunity! This well located Duplex is not far from Downtown San Pedro where all the excitement and revitalization is happening! Near th...

Pride-of-Ownership triplex in a great area of San Pedro and it's priced to sell! Front building is a charming Craftsman style side-by-side duplex built in 1923. Both unit...

This well maintained Duplex is a 2 story building and consists of two very large 3 bedroom 2 bath apartment units with one above the other. Originally built in 1949 as a ...

Situated in a PRIME LOCATION within the resort-style community of Harbor Gate, this bright and spacious 2 bedroom, 2 bath condo is move-in ready. This beautiful one level...

This unique property is on the side of the street that offers the priceless panoramic Pacific Ocean and Catalina Island views! Good size 2 bedrooms 2 bathrooms Manufactur...

Located in the heart of San Pedro in the prime Vista Del Oro area, is a fantastic 3-unit triplex with corner lot location and 3 garages! (1) three bedroom, 2 bathroom uni...

Million dollar Ocean Views. Amazing upper level one bedroom, one bathroom condo with ocean and canyon views. this unit is one of the most desired locations in Miraleste ...

Very cute 2 bedroom, 1 bath with over 1100 sq. ft. of living space. A covered porch sets the tone on this upgraded ready to move in home in the heart of San Pedro. Beauti...